For the past three decades, Kamel Ghribi has brought forward-thinking initiatives to the global petro-chemical and health industries. But that’s only part of what has made him a significant figure on the world stage.

It’s also his renown for making a lasting impact through philanthropy, and his worldwide diplomatic efforts to build bridges amongst nations.

Born in 1962 in Tunisia, Ghribi’s first major position was as vice-president of the Olympic Petroleum Corporation in New York, at the age of 29. Concurrently, he was president of Olympic Management,in Italy.

Later, he became president of Attock Oil Company in the UK, which he sold, to devote time to his Swiss-based company GK Investment Holding Group, a private equity and investment firm.

He also serves as the President of GSD Healthcare Middle East, part of the largest Italian private healthcare corporation, Gruppo Ospedaliero San Dontato, that oversees 19 hospitals, and where he is Vice President. In October 2020, Ghribi led roundtable discussions in Rome, Italy with various Italian, African and Mediterranean government representatives, to forge cooperation and share strategies aimed at battling COVID-19.

Over the course of his career, he has helped raise funds for a long list of charitable foundations, including those run by world leaders Prince Albert II of Monaco and Queen Rania of Jordan.

Edge Leaders learns more about this international businessman and what ideas he can impart to others.

What motivated you to enter the business world?

I think the moment that my destiny seemed set was doing odd jobs at an international hotel in Sfax (Tunisia) for pocket money as a child in the 70s. I enjoyed the hustle and bustle of working in the midst of people from all walks of life, and I spent some of the happiest and most gratifying years of my youth during those moments, helping out with any chore I could lay my hands on.

However, I think that the true defining moment came when I realized that even humble work could prove to be lucrative. My time spent at the hotel was also an invaluable experience in terms of education, as I met many people willing to share their experiences. Most of all, it made me realize that by earning money, I had the power to help those around me.

Although I was not given any more chances than the average person, I understood how to make the most of any opportunity. My experience at the hotel showed me that without hard work and a determined spirit, then talent risks being wasted. With that in mind, upon leaving school, I had to make the first important decision of my life – stay and continue my education in Sfax, or try my luck abroad, and take a leap into the unknown.

I felt that I could better my circumstances by leaving my homeland. I therefore headed off to Europe, having already secured a job.

How did you begin in business?

I was fortunate in that my father successfully ran a small trading business. Combined with my own experience, you could say that I hit the ground running. Following the sudden death of my father, I was his natural successor, and have never looked back. I have never forgotten his influence on my thinking, and realized that I had soaked up many business techniques from him. He used his wit, sense of humour, and ability to instill trust. Everything he knew, he learned by making mistakes.

I also believe that my mother’s refusal to allow setbacks to defeat her were also paramount to getting me started, as it defined my approach to business. In the last analysis, I firmly believe that in order to get started successfully, you must never lose sight of your goals, stay ambitious, and never allow circumstances to limit you.

What advice for success can you offer?

Success is not solely dependent on opportunity, but also on how you interact with the people you deal with. Any challenges I faced, I dealt with through pragmatism, openness and honesty. I also believe that you must treat people with respect, unless of course they prove unworthy of such respect through their actions and decisions.

What is the most difficult part of running a large business?

When you are responsible for having built up an empire from nothing, then there is always an extremely high temptation to micro-manage your company, even when it becomes too big to do so. However, as a business grows, it is impossible to be active across all elements. It is essential to choose the right staff to do the job not only as you would, but arguably even better. The second risk is losing sight of your goals. Success is rarely immediate; rather, it takes perseverance and patience to achieve. Therefore, we often find ourselves losing motivation or interest in favour of easier pursuits.
What motivated you to undertake philanthropic projects?

I have always believed that success in business must come with social responsibility. We cannot simply profit from a region such asthe Middle East or a continent such as Africa anymore. We have skills that can be used to foster peace and stability, because we can create opportunities for growth that will lead to social and economic development. We can invest in business projects that help local populations, and work closely with leading industry experts, educational and medical institutions, governments and corporations to establish profitable enterprises, and create social and economic value. 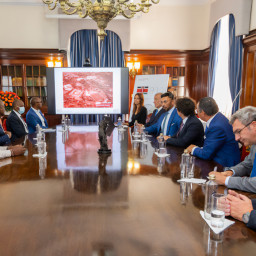 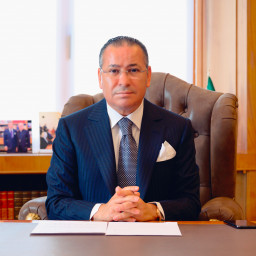